Replacing the VR & HOT brought my B+ back up to 122.5V got me raster. Not white raster, but bright blue. Still not out of the woods yet, as all I can get is a blue screen with regularly spaced horizontal and diagonal lines (see green pic earlier in this, substitute blue for green). Lines are present in the screen shown, but not visible in the photograph.
I removed the Q403 (blue drive - neckboard) and the main body of the screen is light blue with bright blue diagonal lines. Top and bottom edges are well defined with a black border. L&R are scalloped in, forming a sort of letter "I" shape. Removing the RBG connection between the main board and the neck board cleaned up the edges nice and straight once, but that may be a fluke as I haven't been able to reproduce it again. 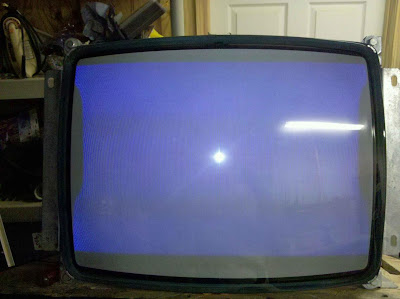 I'm stumped. Fromm diagram suggests Q201, Q202, but with the neck feed disconnected, they are out of circuit. Am I seeing a failure in the oscillator and hence no change when it's disconnected from the neckboard?
Posted by Philip Doolittle at 10:46 PM
Email ThisBlogThis!Share to TwitterShare to FacebookShare to Pinterest
Labels: 19K4915, Atari, monitor, repair, super sprint