SuperSprint Repair - Pt 8 - Drawing a blank, or not! 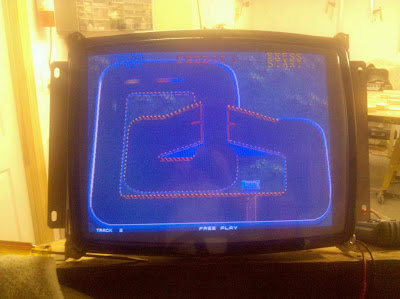 Victory! Well, actually just progress. I replaced Q201 & Q202 in the blanking circuit. That gave me a picture (FINALLY!), but it was still heavily blue biased (see pic 1). For good measure, I also replaced Q205 & Q208 in the main board blue drive circuits. For a few glorious minutes, I had correct color. Then it returned to blue biased again??? 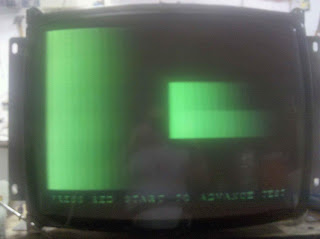 Next, I swapped the Red and Blue neck board transistors (Q401, Q403) with no change. After that, I pulled all the pins from the RGB feed to the neckboard (except T) and began playing mix-n-match with jumpers. No matter what happened, sending a signal to the blue input resulted in a blue that was too strong. Diagnosis; Problem is not in the mainboard. 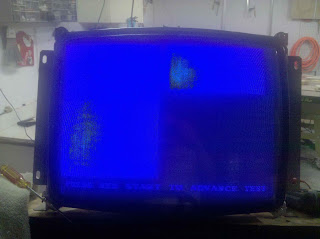 To diagnose the problem further, I lifted the final current limiting resistors (3) feeding the RGB pins on the tube. No picture (black) as expected. But to my surprise when I cranked up the screen control near max, the image began appearing faintly on screen. (cross talk?). Anyway, I jumpered from the each drive circuit to KR, KG, KB. Consistently, whenever any signal was applied to KR or KG, it looked normal (pic 2). But when that same signal was applied to KB, I got an overly bright blue screen (pic 3). Diagnosis; Problem is not in the neckboard. At this point, I believe there is a problem with the blue gun. But, testing it against H, and every other pin on the neck I get no short and >1Mohm resistance. And the blue ends at the well defined edge of the raster. However, if I turn up the screen, I get raster lines that are blue, and a blue "background" where there should be white raster.

By playing with the drive pots and the screen control, I manage to get a proper picture (pic 4), but the blue pot is all the way down and the other pots are all the way up. Also, the screen seems set a little high at about 11o'clock. At 9 o'clock there is practically no image at all. It's usable, but I wonder about running these pots hard at one end or the other.


Conclusion: It's playable but I'm still not certain where the blue problem lies. I had speculated that the problem was a "hot" blue gun and a weak red and green because of how I set the pots. However, with a good picture on screen, final K voltages are R-87.2, G-88.7, B-101.0 vs 88.3VDC spec for all. What confuses me is that *dropping* the blue gun to 88.3 dramatically increases blue bias and creates raster lines on screen. Perhaps's an inverse coupling of K voltage and screen brightness is normal and I just don't understanding completely how the CRT works.