My hayward T-15 salt water generator cell decided to up and die after 9 years, so I decided to find out a) what causes it, and b)if it is repairable.
For those who are too impatient to read to the end the answer to B) is Yes and No. Yes, it is *easily* repairable. No, because the cells have been designed so as make them non-serviceable. Quite frankly this makes me a bit perturbed as it makes ABSOLUTELY no sense to spend $500 when a $50 repair will suffice. Now, on to dissection.
The salt cell as it was removed. It was provided by the pool builder, and has been in service since summer 2003. The seam underneath the label is melted or welded together, and survived quite a few sharp blows that I was hoping would cause the seam to fail. 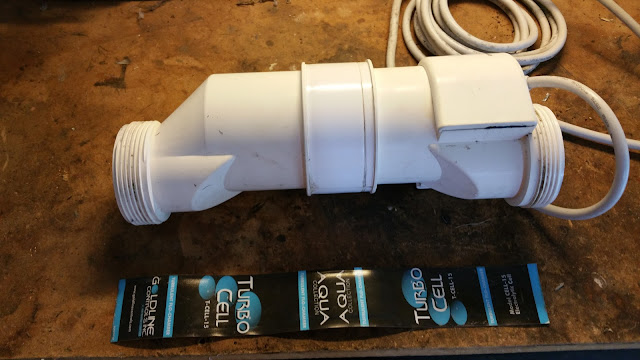 Cover removal is accomplished by flipping the unit and slipping a screwdriver into the gap. It simply snap over a plastic pin (bottom center) and comes off easily.
The black substance on the left hand sensor is hard, apparently some type of epoxy. The black stuff at the top, which can be seen running, is like cooled tar and can be dug out as we will see shortly. 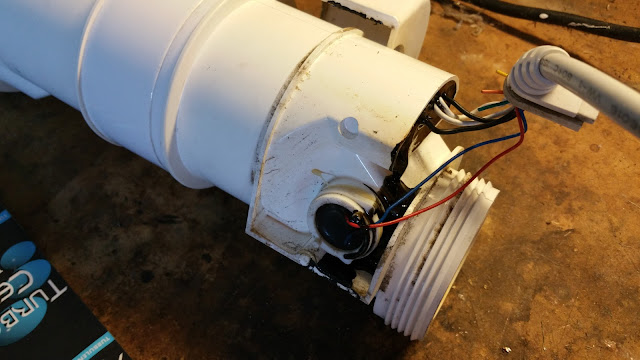 The tar dug out, revealing three screw on connections. Two black (cathode) and one white (anode), with the blacks jumpered together. These correspond to connector pins 1,3 and 2,4 as seen with the connector facing you. Red and blue connect to pins 8 and 10. 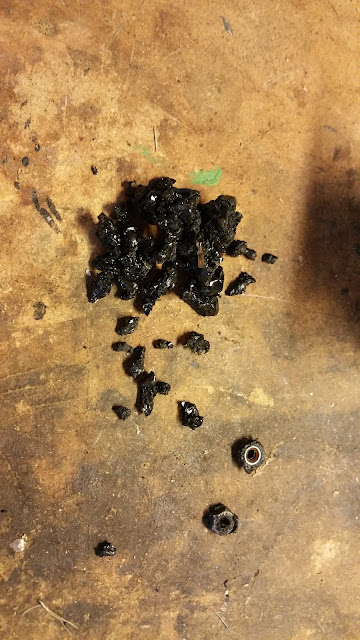 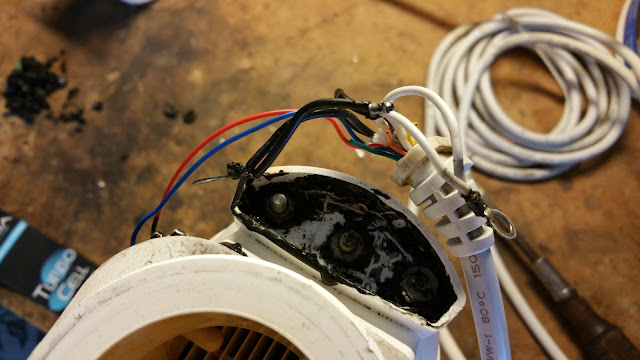 The cell cut open. Only plates 1, 7, and 13 are connected. 2-6 and 8-12 are simply held in place by the plastic guides. These plates correspond directly to the connections seen above.
Visible on the bench are the 10 loose plates. As you can see, they show VERY LITTLE evidence of erosion and no evidence of scale or calcium buildup. 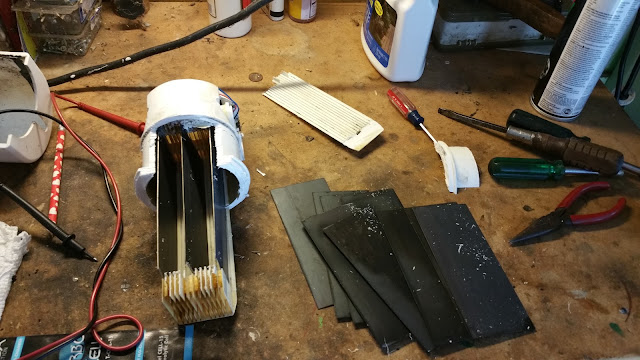 It quickly became apparent that the edge plates were held fast, while the center plate was loose. It pulled out easily to reveal the contact post had corroded in half.
Note: This cell failed suddenly after 9 years of perfect service. Obviously at some point the contact post (which appears to be brass) separated because of galvanic corrosion. Not really a surprise as the anode only has one connection, while the cathodes have two. 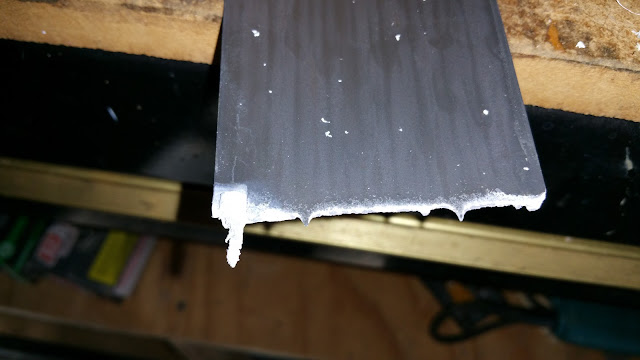 A close up of the failed center stud. Plate erosion is minimal. 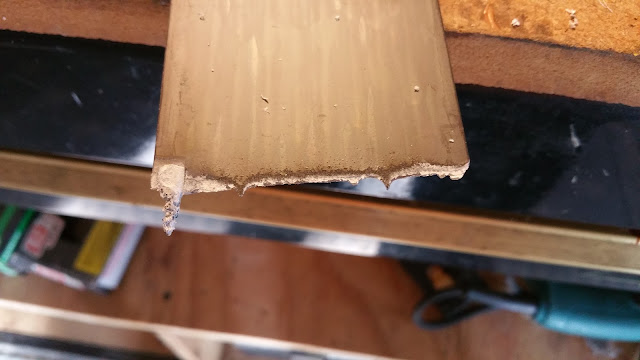 All three plates together 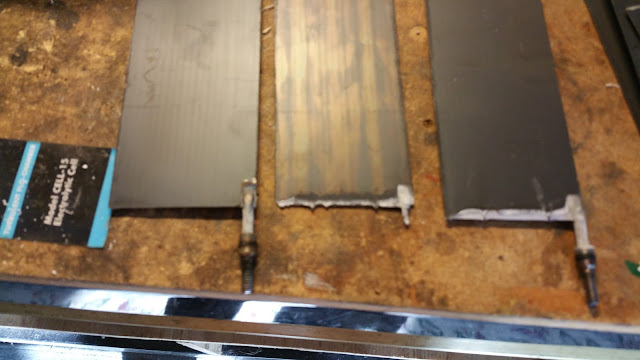 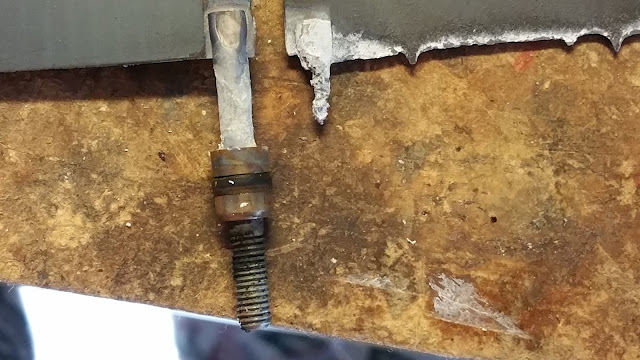 Looking down into the cell (plate guide removed), you can see what remains of the center post. 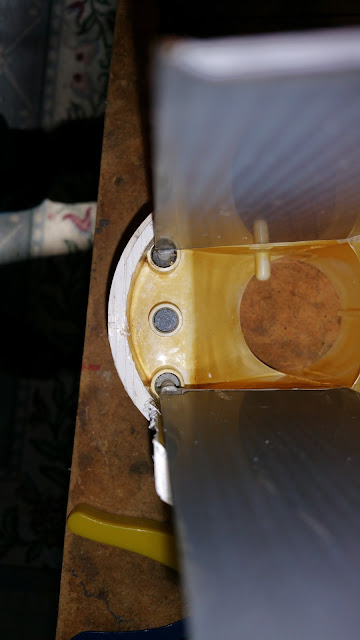 The full set of plates, in the order they appear in the assembled cell. Again, note almost ZERO erosion on the unconnected plates, and only minimal erosion on the cathodes. 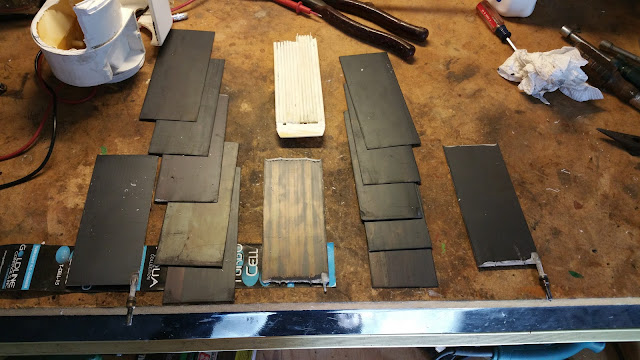 And finally a close up of the "active" plates next to the "passive" plates. As you can see, actual damage to the plates is minimal. 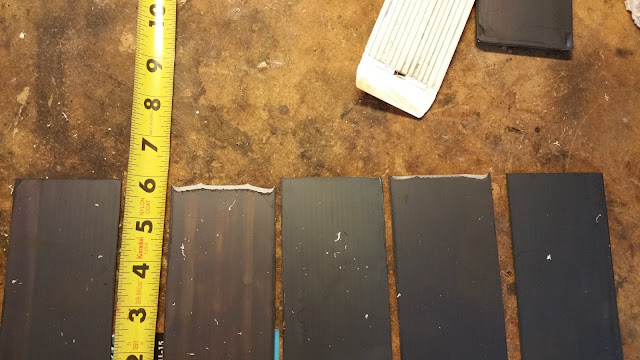 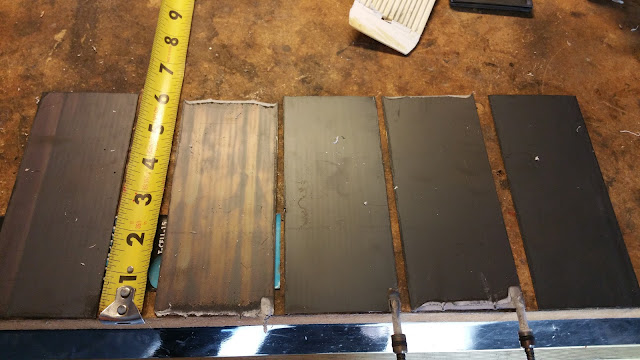 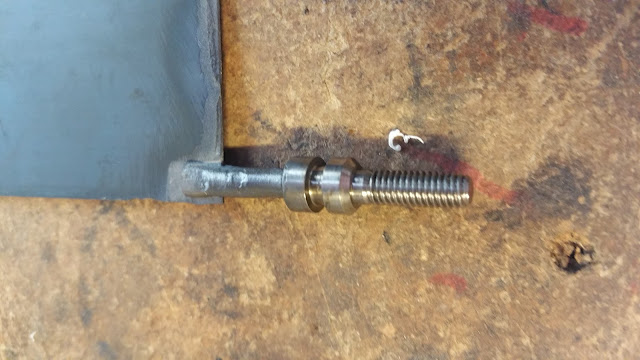 The housing with remaining anode post and cathode posts removed 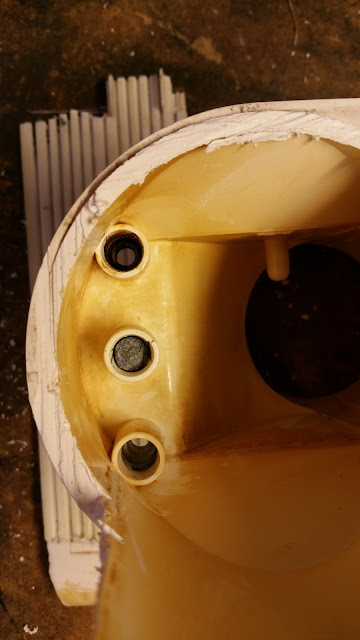 In my opinion, there is absolutely no reason for these cells to be non-serviceable. Even if the entire plate assembly had to be recycled/replaced, the tail cap should come off, three nuts removed, and the plate assembly drops out. Re-insert, reassemble, carry on. The initial cost of such a housing would be more, but the guts could be replaced every few years for a small fraction of the cost of a disposable unit.
After 9 years, there is almost observable no damage to the plates, and the cell was performing perfectly until it up and quit. In fact, the only place where noticeable erosion exists is where dissimilar metals are joined, so I suspect the failure is not use but galvanic corrosion. If so, the design should be correctable with a sacrificial anode.
I suspect a large number of these cells are failing because the "anode"(1) stud separates, as mine did. If the case were not sealed, I would have acquired several "dead" units and salvaged plates to make mine workable again.
In a nutshell, I am of the opinion that we are getting fleeced on these cells because a sealed design makes for a larger profit margin.
Philip

Posted by Philip Doolittle at 11:35 AM No comments:
Email ThisBlogThis!Share to TwitterShare to FacebookShare to Pinterest
Newer Posts Older Posts Home
Subscribe to: Posts (Atom)